In an increasingly complex and uncertain global environment

Public Financial Management (PFM) is evolving from a narrow focus on budgeting towards a wider mandate as a key driver of policy and strategy across all levels of government, public services, state enterprises and public-private partnerships.

While the rate of this evolution differs by country, the results of this research from Grant Thornton International in association with the International Consortium on Governmental Financial Management (ICGFM), reveal a marked overall increase in innovation and several global trends manifesting. These fall within four major areas impacting PFM: reform programs; infrastructure development, especially via Public-Private Partnerships (PPPs); transparency, especially via digital channels; and the impact of global economic uncertainty.

This report draws on a recent survey of 278 PFM practitioners worldwide as well as insights from experts at the ICGFM, the MIT Centre for Finance and Policy and Grant Thornton International. It is the latest in a decade-long series jointly published by Grant Thornton and the ICGFM. 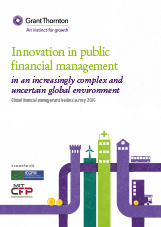