The European economy remains resilient despite the risks

​The European economy, still continuing its economic recovery after the 2008 financial crisis, faces many potential risks. Though varied, they fall into two broad categories. Firstly, a band of social and political pressures which are driving media headlines: a potential ‘Brexit’, the migrant crisis and the continued rise of nationalist sentiment. Secondly, we have economic issues that have been present for a good few years: high unemployment, low inflation and persistently low economic growth.

Amid this backdrop, how are businesses faring? Grant Thornton’s International Business Report (IBR), a quarterly survey of over 2,500 businesses in 36 economies worldwide, put a series of questions to Europe’s business leaders to find out.

Our research has found that despite this complex web of pressures, the business community remains resilient in its outlook, 52% of European business leaders are optimistic about the economy. There’s optimism around the economy’s ability to weather the storms. It has held firm in recent months, while support for the European ‘project’ remains largely robust. However, businesses cite weak economic fundamentals such as low inflation, high unemployment and economic growth as the biggest threats to economic stability. Furthermore, if summer 2016 does bring a UK vote to leave the European Union (EU) and the predicted increase in the flow of migrants materialises, confidence could face its most significant test in recent years. 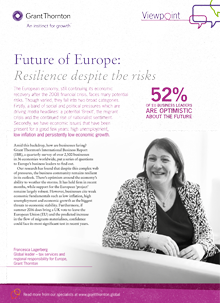