Jobs under threat from automation

Fifty years on from the world’s first personal computer going into mass production, the Grant Thornton International Business Report, a survey of 2,571 executives in 36 economies, reveals the scale of technology’s influence on business with the majority of firms now planning to automate operations and practices. The findings suggest that some jobs will go as a result, with the manufacturing, cleantech and food & beverage sectors in particular reporting upheaval. With capital costs low as labour costs rise, the findings pose fundamental questions about the extent to which machines will eventually replace humans.

Globally, over half (56%) of firms surveyed told Grant Thornton they are either already automating business practices or may do over the next 12 months. By industry, 43% of manufacturing firms said they expect this to eventually replace at least 5% of their workforce. Cleantech was in second place on 39%, followed by the technology and food & beverage sectors on 35%. At the other end of the spectrum, just 9% of hospitality, education and healthcare firms expect 5% or more of workers to be replaced. 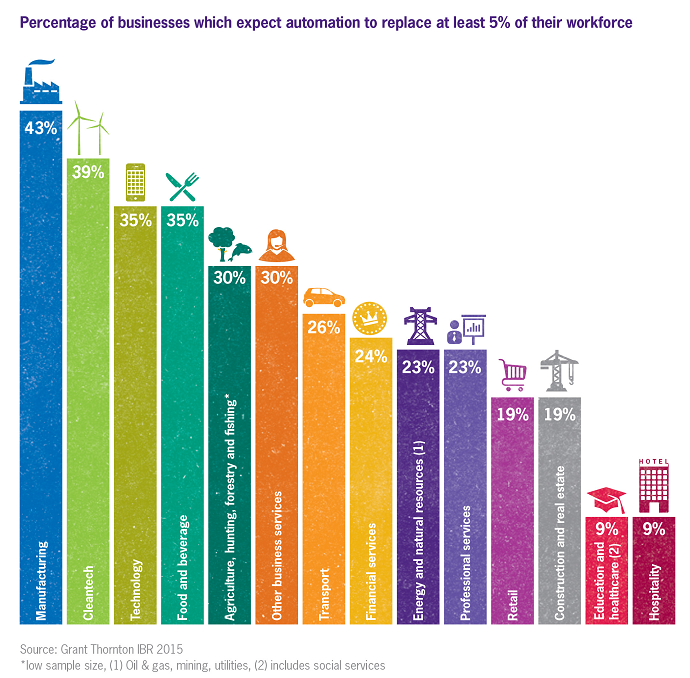 Steven Perkins, global leader for technology at Grant Thornton, said: “In this digital age, businesses are looking to technology at an ever increasing pace. Post-financial crisis, firms continue to strive for greater efficiency and better productivity. But fifty years on from PCs going into mass production, costs of capital are low while labour costs increase. As businesses consider whether to invest in staff or machines, for many, the latter is becoming the more cost-effective option.”

Further research conducted by Grant Thornton uncovered increasing business spend on research and development – underpinning the growth in automation. In 2011 23% of businesses globally said they were planning to boost R&D spend; that increased to 26% in 2014 and so far in 2015 it stands at a five-year high of 29%.

Steve Perkins added: “Are robots set to replace the workforce? That may be premature; technology has been introduced to the workplace since the industrial revolution and job roles have adapted accordingly. In fact, it’s likely the wrong question. We should be asking: ‘What human capabilities will be most enhanced?’ Clearly, the rise of artificial intelligence (AI), supercomputers and sensors - previously the preserve of science fiction - will have profound consequences for jobs, pay and the make-up of workforces. We may continue to see people redeployed to lower-paid service roles as high-powered and previously high-paid jobs become the preserve of intelligent machines. Without intervention we will continue to see a growing divide in income and opportunity between knowledge-based and service-based economies and careers.

“This poses significant societal challenges. Technology is part of our lives in ways we couldn’t have imagined two decades ago, from the rise of big data to the app revolution. That trend will continue and it means the shape and size of workforces of the future will look radically different to those of today. How businesses and governments deal with these changes will be critical to long term economic growth prospects.

“While some job losses will occur as technological advances increasingly transform both the private and the public sector, technology will complement and enhance human capabilities, increasing both the quality and quantity of our efforts.”

Grant Thornton’s findings also suggest that opportunities will arise for workers to assume new roles and responsibilities created by an increased use of technology. Globally over half of automating firms (54%) expect to redeploy workers in other areas, with 28% saying that workers will be trained to operate new machinery. Even in manufacturing, 44% of firms plan to redeploy rather than remove staff.

Steve Perkins commented: “The roles reserved for humans could look very different years from now and some will feel the effects more sharply. Automation in the first industrial revolution made us stronger, made us faster in the second, and in the third will give tremendously greater insights. The possibilities are enormous.

“History has proven that workforces are resilient and adaptable but the rise of intelligent machines, analytics and an ubiquitous 'internet of things' pose significant opportunities and challenges. No sector or profession is immune. Increased dialogue between governments, businesses and education institutions will help us better understand where gaps in the labour market will exist, to ensure we have a pipeline of people being educated and trained to fill those roles.”

Read more about the benefits and challenges of automation in GrowthiQ.